Philanthropist of the Year – Gene Willers

Gene Willers, the President of Midwest Bank in Pilger, has displayed selfless generosity in his efforts during and after the devastating tornado to protect and rebuild the community of Pilger.

Maggie Robinson is a first grader who, after seeing the aftermath of the Pilger tornado, wanted to find a way to help.  She sewed rice packs, which she called Packs for Pilger, and sold them to raise money for the tornado relief.

Volunteer of the Year – Nita Totten

Nita Totten, a tireless volunteer, has been supporting area cancer patients with countless hours and great compassion over the last several years.  Among other things, she started the Hope Fund which provides direct aid to patients with cancer and developed the Hand-in-Hand volunteer program that pairs cancer survivors with newly diagnosed patients with a similar type of cancer.

Kent Warneke has served as editor and Vice President of the Norfolk Daily News since 1987.  In addition to his involvement in several local and state organizations, he is the founder and principle fundraiser of the Great American Comedy Festival which brings national-level comedians to Norfolk.

Watch all of our 2015 Philanthropy Award Winners talk about what philanthropy means to them. 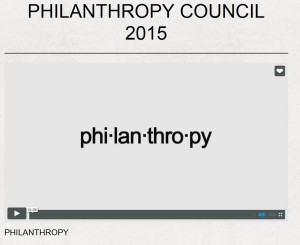 Nominations for next year’s Philanthropy Awards will be open in the fall of 2015.